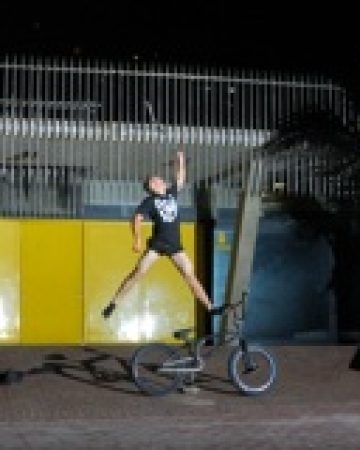 Checkin’ in with Felix

Felix Murray-Shum started out as a quiet, ‘background’ kind of guy, but then his love for street riding brought out a strong personality and a flair for BMX second to few in the South African BMX scene. Felix now has a quiet air of determination about him when riding that says “bike first, everything else later” – this is the care-free mentality that we have all come to love about him. A screw loose? Yes. One of the hardest riders in the country? Definitely.

What have you been up to since your last edit?
The usual, filming, hanging out and tripping.

Any recent injuries?
No major injuries,just the usual roasties and ankle tweaks.

What can we expect from your next edit?
Well on a personal level I am a lot more stoked for it than I was for my last one. There’s more of me actually landing stuff instead of me falling on my face lots. Which is still pretty cool, because crash montages are the tits. But yea, I think I have upped my game.

Most exciting thing that has happened this year?
Best trip of this year was easily the one to Richards Bay with the Aussies, Makl and bear man AT. Dream crew right there. All of us are pretty dirty, grungy, human beings, so we meshed well.

Give us a typical run down of a day in the life of Felix…
Well now that Hanks’ store is in Durban City and that I am busy writing my finals; every day has pretty much turned into a riding day since I will head down to the store when I am done with my exam. From there on its hanging out at the store until late afternoon, then its down to beach to session the flat rail. On weekends I am usually on Hanks case to go film at the Westville Uni, but the consistent shitty weather has been making that difficult lately.

Still riding that old S&M?
Well I have now added to my antique ride, since I’m currently on a 21″ S&M Black Bike, after going through 3 or 4 BTM frames…this badboy is holding up nicely. I’m still rocking the shit out of my S&M Ditchforks(which I’m convinced will be making a worldwide comeback in the next few years) and my ride is weighing in at a healthy 13.8kg. It ain’t about how much it weighs, its about how long it holds up. Suck it weight weenies.

Once you leave school do you plan on studying?
Well my whole family is moving Stellenbosch side, since my mom got a job lecturing at the varsity. Next year is my gap year, and I have plans to travel to New York mid year for a few months , and then in 2015 I shall study at Stellies.

Name any 3 places you would like to travel to?
Since i am more than likely already going to New York, it would have to be Germany to see ‘Schlampe’ (Makl), Oz to see the Aussies and Thailand purely for the experience, not to ride. Austin Texas is also high up on my list. And Russia. Bears and Rails man.

Whats with OICNT?
OICNT is the brain child of a Pirate and a Physics teacher. It’s all about riding your bike for fun and good times, and doing whatever the fuck makes you happy in life. Its also about licking girls bumholes. Statistics show 70% of guys would lick a girls bumhole, However, statistics on whether the girl is down for this are unavailable.

Where would you hope to find yourself in 5 years?
With a beard.

What the hell is Farmboy and Skin head?
Farm Boy and Skin head is an excuse for At and I to get really weird and take the piss out of people and things. Its always a good laugh to film, and I am hoping it will become a regular thing.

Do you miss bacon?
Nope, even when I wasn’t a vegetarian I didn’t enjoy bacon. I miss a nice steak done raw though. Or slivers of actual raw steak.

As a underwear model, have you ever found yourself in any awkward situations?
This underwear model nonsense was started by AT haha. Lets clear this all up; I modeled when I was like 15 or something for some sketchy little company that more than likely sold the pictures off to seedy Chinese business men. Then like a year ago, someone approached me at my local park asking if I wanted to be an underwear model for her company(note the HER, it wasn’t some dubious wingchong). Nothing ever came of it though. I did however model a bit at the ditch. Maybe hank will include the picture…

You have a special love for watching Russian street web edits, name your top 5 edits and top 5 Russian riders.
Russia is the new Barcelona, of that I’m pretty sure. heaps of talent and crazy spots. it has probably got to do with vodka and wrestling bears.https://i.imgur.com/3Og1sHq.gif I have no idea what their names are, but I remember edit names.the whole”‘Until it’s Dry” edit collection was really good. and most recently “Adrian Sendyk Fall 2013”. The guys from Poland, but its close enough to Russia. Anyways, last two clips are mighty impressive.

Felixs’ newest edit is already in the works, if all goes according to plan it should be out early 2014. Here’s a snippet from a previous edit…